[One of my favorite things about writing historical fiction is getting to explore the lives of real, and sometimes famous, women—like Alice Roosevelt. When Audrey Met Alice allowed me to spend a lot of time researching the women who have made 1600 Pennsylvania a home in addition to a historic site. (Check out the Resources page of my website for more information on my research, along with a Women’s History Month lesson plan!) But this month, I wanted to devote some words to other female historical figures I find inspiring. Each Wednesday this March, I’m sharing a short post about a fascinating woman in honor of Women’s History Month. I’d love to hear which women interest and inspire you–please tell me in the comments! I’ll (randomly) choose one commenter on each post to win a preorder of the new When Audrey Met Alice paperback. Tweet about the women who inspire you with the hashtag #WomensHistWednesday for an extra entry.]

Last week, I wrote about Jane Goodall. Jennifer Pickrell won a WAMA preorder with a comment about Miep Gies. Thanks to everyone who shared about the women who inspire them! 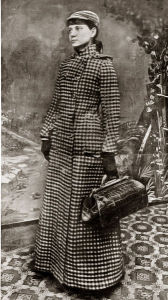 Nellie Bly in a promotional photo before her round-the-world trip (Source: Wikimedia Commons)

Inspiring me today is: Nellie Bly

Nellie was the 19th-century journalist who famously traveled around the entire world in 72 days—at a time when most women wouldn’t do solo travel anywhere. She’s less famous for some of her investigative journalism, but it’s just as impressive. In 1887 she took on an undercover assignment, for Joseph Pulitzer’s New York World, in which she faked a mental breakdown to get admitted to the Women’s Lunatic Asylum on Blackwell’s Island in New York. She spent ten days in the hospital, successfully convincing all the clinicians that she was mad—and once she got out, she wrote a scathing expose of the abusive and negligent care women were receiving there. Her reporting was turned into the sensational book Ten Days in a Mad-House. Nellie not only wanted to see the world, but make it a better place. Her writing both helped readers vicariously travel the world and gain an awareness of problems at home.

Around the World in 72 Days, a PBS film