It’s the last Wednesday of March, so it’s time for one more Women’s History post!

[One of my favorite things about writing historical fiction is getting to explore the lives of real, and sometimes famous, women—like Alice Roosevelt. When Audrey Met Alice allowed me to spend a lot of time researching the women who have made 1600 Pennsylvania a home in addition to a historic site. (Check out the Resources page of my website for more information on my research, along with a Women’s History Month lesson plan!) But this month, I wanted to devote some words to other female historical figures I find inspiring. Each Wednesday this March, I’m sharing a short post about a fascinating woman in honor of Women’s History Month. I’d love to hear which women interest and inspire you–please tell me in the comments! I’ll (randomly) choose one commenter on each post to win a preorder of the new When Audrey Met Alice paperback. Tweet about the women who inspire you with the hashtag #WomensHistWednesday for an extra entry.]

Last week, I wrote about Nellie Bly. Giora won a WAMA preorder with a comment about Eleanore Marx.

Inspiring me today is: Jackie Mitchell 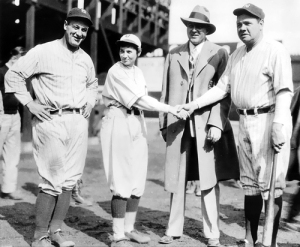 Do you know who struck out both Babe Ruth and Lou Gehrig during one exhibition game in 1931? A seventeen-year-old girl named Jackie Mitchell. She was playing for the Chattanooga Lookouts, a minor-league team that offered her a contract after seeing her pitch for a local women’s team. There is plenty of controversy about her striking out two of the greatest players in history—some think it may have been a publicity stunt. Regardless, it’s amazing to think of a teen girl pitcher leading to Babe Ruth being pulled off the field in a hissy fit. The baseball commissioner canceled her contract shortly after, saying that the sport was “too strenuous” for women, but Jackie continued playing ball until 1937. Women were officially banned from signing baseball contracts in 1952.

I loved Jackie’s story so much that I wrote about it for two Scholastic classroom magazines: “Thatagirl!” in the November 2014 issue of Storyworks and “Girls Can’t Play” in the January 2015 issue of Scope.

The Woman Who (Maybe) Struck Out  Babe Ruth and Lou Gehrig: a Smithsonian video

And thanks for helping me celebrate women making history!