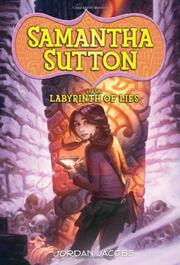 Today I’m excited to host Jordan Jacobs, author of the MG mystery Samantha Sutton and the Labyrinth of Lies, for a guest post. Samantha Sutton features a whipsmart and adventurous heroine, a realistic sibling relationship, lots of action and adventure, and loads of very cool archeology factoids. Jordan Jacobs really does have my childhood dream job: an archaeologist who write novels on the side. When he’s not writing the Samantha Sutton series, what is his archaeology work like? I pictured something straight out of the Indiana Jones ride at Disneyland. Read on to find out what an archaeologist really does.


Just Another Day at the Office
Jordan Jacobs

The movies don’t get everything wrong when it comes to archaeology. Even in real life, there’s plenty of adventure to be found.

As an archaeologist, I’ve gotten to work high in the Andes at Chavin de Huantar—crawling through unexplored tunnels full of bats and rubble and scattered human bones. I’ve excavated Crustumerium, just north of Rome, where Bronze Age peoples lie at rest in a sprawling city of the dead. I’ve worked in the United States as well, clearing cemeteries in advance of major construction projects, excavating cliff dwellings, and digging the toilet of a California governor from the wreckage of his earthquake-totalled mansion.

But of course, this sort of adventure is only part of the job.

An archaeologist’s task is to study past cultures through what they’ve left behind. These pieces of evidence—or “artifacts”—can be as big as an Egyptian pyramid or as small as a speck of pollen, stuck to an ancient cooking pot. But the information they contain can be surprising. Archaeologists can use these artifacts to reconstruct how people once lived—from the food they ate, to the way they fought, to the religions that they practiced and their views of the world around them.

The archaeologist’s “typical day” takes a variety of forms. Some work mostly in the field–surveying the land, digging precise excavation units into the earth, looking for patterns, making comparisons, and drawing careful conclusions from whatever pieces of the past still remain. Others work in laboratories, using the tools of science to discover how old an object is, exactly what it’s made of, or precisely where it came from. Still others spend their days in museum storerooms, re-examining the evidence recovered by their predecessors. And some archaeologists work with governments and companies in order to protect sites from destruction through development, looting, neglect, or war.

But archaeology also carries a lot of responsibility. One awkward truth is that excavation destroys sites, meaning that each particular discovery can be made only once. It’s up to the archaeologist to record everything he or she can–otherwise, that information is lost forever. Just as importantly, archaeologists have a responsibility to the people who live nearby the site, or who claim it as their ancestors’.

At its best, archaeology is a little like time travel. Holding an artifact in your hand can make you feel a connection to someone who lived centuries or millennia before. It’s intimate. It’s humbling. Seeing the fingerprint of a potter on the surface of a plain and broken pot is a reminder of the humanity all people share–no matter where, or when, we live.

*Full disclosure: I share a publisher, Sourcebooks Jabberwocky, with Jordan Jacobs. I purchased my own copy of Samantha Sutton, however, and any opinions are my own.*