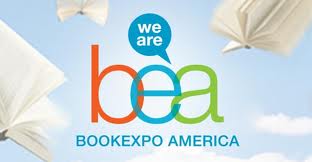 Thursday was my lucky day, and I got to pop by BEA to spend a couple hours on the floor. I timed it so I could check out a panel: “Writing Strong Female Characters In Middle Grade Books” with Lauren Oliver, Sharon Creech(!),* Judith Viorst, and Shannon Messenger.
Here are some highlights from the panel.**

Which comes first, the world or the character? How does a voice develop?
For Lauren Oliver, character and world develop simultaneously. Specific lines come to her first, which bring the character and worlds together; then she starts exploring it. “The character’s journey is yours, too, as a writer.”
Sharon Creech also finds that world and character develop simultaneously. She strives to stay true to what the character thinks, feels, and speaks. That helps define the world (and voice).
For Judith Viorst, voices lurk “in the location of her belly button.” Writing her Lulu books was the first time that she went from telling a story to her grandkids to turning it into a book.
Shannon Messenger trusts the story: “It tells me where to go.” Her character Sophie came to her before the world of the story did (Keeper of the Lost Cities).

When do you include older characters in a middle-grade story?
SC: She always feels compelled to have older characters and to incorporate what they are thinking.
LO: Sometimes she includes older characters; sometimes she simply has a “mechanism of older wisdom;” it depends on the book.
JV: Likes to include a lot of sibling rivalry.
SM: Is partial to the “cliche of the orphan,” but her characters still have parental figures.

On unlikable characters:
JV: Loves the “hard likes”–characters the reader will eventually come to like, but it’s not easy.
LO: Never felt nor internalized the pressure to be a good girl, so she likes complexity in her characters.
SC: Unlikable, or bad, characters are much more fun to write.
SM: Her “bad boy” character was the most fun to write. She notes that you have to push the reader to see why they should like those characters.

On their writing processes:
LO: The mystery is: what’s this book about. She outlines to some extent, often after she writes 10K so the book starts living.
SC: Has a fluid process. She doesn’t trust an outline [for first drafts] and has to go organically or it is too school-like. After the first draft, she sort-of outlines to look for holes.
JV: The discipline is getting in the chair. She makes herself sit down every day, idea or not.
SM: She makes word count goals, which are sometimes unrealistic. Prefers the “Connect the Dots” method of neither outlining nor pantsing.

*A favorite author from my own middle-grade years, so I was thrilled to see her. I heard Sharon Creech speak about Walk Two Moons and Absolutely Normal Chaos as a tween, and the writing advice she gave in that lecture continues to inspire me!
**Please do not treat as direct quotations as my note-taking was fast and furious.