by Rebecca | May 6, 2013 | books, historical fiction, middle grade, MMGM, nerdiness, this is how we read it, What I'm Reading Right Now | 9 comments

As a reader, I have a strong pull toward girl heroines–if I were to break down the kid lit I read, probably 92% has a female MC or narrator. Also as a writer, I generally find inspiration in girl POVs. So I’ve been meaning to pick up more books that have boy voices. I’ve always loved reading Karen Cushman’s strong and interesting girl
protagonists, as well as her intricately researched historical fiction, so I was excited to read her first book with a male main
character: Will Sparrow’s Road.

“I care for no one but myself, and nothing but my belly,” says Will
Sparrow, the itinerant hero. He’s a tween boy making his way, alone, along a road and through the vibrant and sometimes dangerous world of 16th-century England. Will has good reason to care for his belly–he’s hungry and has to rely on cleverness and the occasional thievery for food. A plot summary from the Goodreads page: 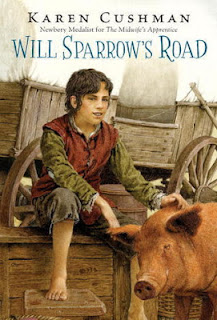 In his thirteenth year, Will Sparrow, liar and thief, becomes a runaway. On the road, he encounters a series of con artists—a pickpocket, a tooth puller, a pig trainer, a conjurer—and learns that others are more adept than he at lying and thieving. Then he reluctantly joins a traveling troupe of “oddities,” including a dwarf and a cat-faced girl, holding himself apart from the “monsters” and resolving to be on guard against further deceptions. At last Will is forced to understand that appearances are misleading and that  he has been his own worst deceiver. The rowdy world of market fairs in Elizabethan England is the colorful backdrop for Newbery medalist Cushman’s new comic masterpiece.

I really loved how this book worked as a classic picaresque (Comp Lit Nerd Alert, I know), in that Will had to live by his wits to survive in a somewhat harsh world–sometimes to comic effect. The plot had a great balance of being episodic (neat little scenes in which Will has a struggle, or does something clever; characters who flow in and out in a way consistent with Will’s chaotic life and the time period) and having a rewarding character arc. I also loved how, in true picaresque style, Cushman didn’t pull her punches in terms of the difficulties all people–including children–experienced during that time. The stakes were high for Will, and it made his successes that much more rewarding.

To see what other marvelous middle-grade books readers and writers are blogging about today, check out Shannon Whitney Messenger’s blog for the MMGM links!