by Rebecca | Jun 6, 2011 | in which I embarrass myself, Lyleish, talking about writing, treat this post as evidence of procrastination, trends, WIPspiration | 4 comments

I stumbled into joining Pinterest lately–my friend invited me and I signed up, but had no idea what I was making an account for. Then other friends started “following” me on Pinterest and I still didn’t have a clue what it was, but figured it was time to figure it out. So, being a lazy person in the 21st century, I posted a status on Facebook: Hey guys, what is this Pinterest thing and why should I be using it?
Turns out Pinterest is a collection of virtual pin boards, social-networked. The official explanation: 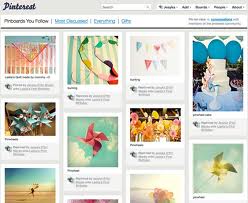 What is Pinterest?
Think of Pinterest as a virtual pinboard — a place where you can create collections of things you love and “follow” collections created by people with great taste.
People use Pinterest to collect and share all sorts of things — wedding inspiration, favorite T-shirts, DJ equipment. You name it, people are pinning it.
We know you have great taste in something. Our mission is to make Pinterest the best place for you to share your taste with the world.
It feels kind of like fantasy football but for stuff. Sure, it’s inspiring, but looking at other people’s boards starts to make me feel a little tight-chested, like I am never going to have enough disposable income/time to make my home/wardrobe/travel plans/food look even 1/8 as good as the stuff on Pinterest. I turn away from the screen and see my haphazard, design-aesthetic-lacking furniture and the jar of Old El Paso in my fridge and stretched-out cardigans from Old Navy and feel like a wee bit of a failure at life.
But–I’ve found one awesome way to use Pinterest for my writing. I’ve always tried to make character collages to get a sense of the gestalt of my characters. Handmade, IRL collages are not the easiest to put together; you need a lot of magazines, glue sticks, and time. It’s also easier said than done to find the right images for your characters/settings/whatever you’re making the collage for. Not so with a virtual pin board. I can create a new board for a character or scene, then run all over the Internet snagging related images. Maybe I find a house that looks like the spooky one a character is renting. Then maybe I find an image of the food she’s cooking, the dress she’s wearing, the musician whose album she’s playing when the ghost first appears. When I sit down to write the scene later, all my inspiration is right there on Pinterest if I need it.
I’m not sure yet how much I’ll use Pinterest as a writing tool–for one thing, pin boards are public and I like to write with the door closed. It’s a cool option to have, though.