I love March for a few reasons: daylight savings time begins, theoretically it stops being so cold, the Chicago River gets dyed green, and the official start of SPRING! But I especially love that March is Women’s History Month and we get to spend 31 days celebrating daring, genius, funny, complicated, important, strong, wise ladies. One of my favorite things about writing historical fiction is getting to explore the lives of real, and sometimes famous, women—like Alice Roosevelt. When Audrey Met Alice allowed me to spend a lot of time researching the women who have made 1600 Pennsylvania a home in addition to a historic site. (Check out the Resources page of my website for more information on my research, along with a Women’s History Month lesson plan.) But this month, I wanted to devote some words to other female historical figures I find inspiring.

Each Wednesday this March, I’ll share a short post about a fascinating woman in honor of Women’s History Month. I’d love to hear which women interest and inspire you–please tell me in the comments! I’ll (randomly) choose one commenter on each post to win a preorder of the new When Audrey Met Alice paperback. Tweet about the women who inspire you with the hashtag #WomensHistWednesday for an extra entry.

Inspiring me today is: Bessie Coleman 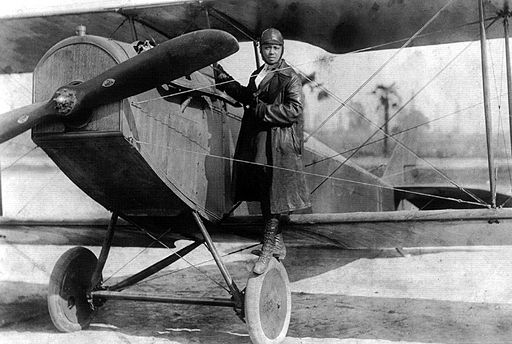 Bessie Coleman and her plane in 1922 (Source)

Maybe you’ve noticed, while heading in or out of O’Hare airport, that you get to the terminals via Bessie Coleman Drive? It’s a fitting tribute to the former Chicagoan, who was the first African American woman to get a pilot’s license. While Bessie worked as a manicurist in Chicago during World War I, she listened to airmen tell stories about their flights, and it piqued her interest so much that she began to study aviation. At the time, no flying schools in the United States would admit an African American woman—so Bessie first attended the Berlitz school in the Loop to learn French, then moved to France. There she learned to fly in just seven months and earned an international pilot’s license in 1921. Upon returning to the United States, Bessie earned a living doing aerial tricks and stunts across the country. She hoped to make enough money to start a school for African American pilots. Tragically, she died at age thirty-four in an airplane accident–but her legacy lives on.