Before I started inputting my hard-copy edits Saturday, I decided to make a Wordle of my MS. (Yes, I was procrastinating.) Copying my entire 70K MS to the clipboard and pasting it into the Wordle maker almost killed my computer, which was probably EXTREMELY STUPID to do, especially because I didn’t save the file or anything beforehand. But I lucked out, my geriatric MacBook regained its footing, and I got this cool Wordle out of it: 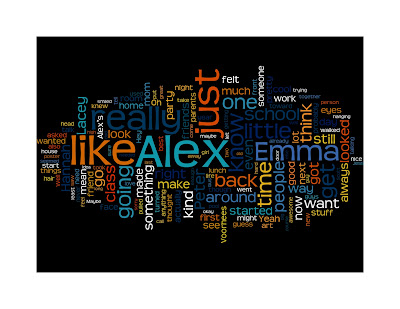 Neat, huh? Also–educational. Notice which words are the largest? Alex, like, Emma, really, and just. Two of those refer to characters, so I would expect them to be used a lot. One of them can be used as several parts of speech–like is verb, modifier, and verbal tic/filler–but still shouldn’t be that prevalent. The MS is not a courtroom drama, so I doubt just was ever used as anything but a modifier. And really–really? I guess I really need to cut down on how really often I use really. Really.
Obviously, after several rounds of revision I’ve varied my word choice and cleaned up the prose and a lot of the interesting words I’ve used aren’t going to show up in a Wordle made from 70,000 words. Even if I only use really and like every three pages, they’d still be big. That doesn’t mean, though, that I shouldn’t try to cut their use as much as possible. Making the Wordle was a giant reminder that I need to watch for repetition and be mindful of what I can cut so the story is told more eloquently and efficiently.
Ready to revise your WIP? Try just making a Wordle, and help yourself see which words you really need to snip.